The local chapter of the global movement Extinction Rebellion is challenging the system that has brought an existential crisis to humanity and all of earth’s other life forms.

With large puppets, banners and signs, they walked along Cameron Avenue and South Roberson Street to Franklin Street. Here they took up both eastbound lanes on their way to Peace and Justice Plaza where a rally on climate change was held at 9:30 am. They sang, chanted, and paused in the Columbia Street intersection. On arrival at the rally, they delivered a message via mic-check, a call-and-response format.

This procession had no permit. Chapel Hill police in at least 5 patrol cars provided an escort.

Extinction Rebellion is an international mobilization against mass extinction and the risk of social collapse. Born a year ago in the UK, the movement now has over 650 groups in 45 countries and 30 US cities. They have gained endorsements from thousands of health professionals and climate scientists as well thought leaders like Noam Chomsky, Vandana Shiva, Naomi Klein, and Bill McKibben.

Extinction Rebellion differs from environmental groups that focus on policy and lobbying. Through nonviolent civil disobedience, they make four broad demands that avoid specific energy solutions or tax incentives. They demand first that governments tell the truth about climate change and take action that matches the crisis. 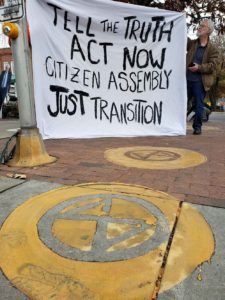 According to a letter published in the journal Bioscience by 11,0000 scientists, “The climate crisis has arrived and… is more severe than anticipated, threatening natural ecosystems and the fate of humanity.”

The 11,000 scientists say further, “Despite 40 years of global climate negotiations… we have generally conducted business as usual and have largely failed to address this predicament.”

In response to this failure, XR demands that a Citizens’ Assembly oversee the changes. The members of Citizens’ Assemblies come from all walks of life and do not depend on campaign funds from sources that can influence their decisions.

XR’s final demand is that the reshaping of culture to protect the natural world also speaks to the needs and well-being of every human being, across all categories.

As one XR member involved in the action Friday put it, “There is no solution within a system that sacrifices the possibility of a future and life itself. It is our right and duty to rebel for life.” Both in the cause of life and for a lifetime.